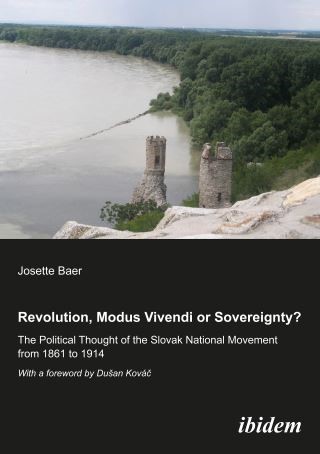 This study, the first of its kind in English, presents an overview of Slovak intellectual history in the 19th century, including the debates surrounding the memorandum of 1861, the political stagnation of the 1880s, characterized by an increasingly Russophile orientation, and, finally, Czechoslovakism as the way to common independence with the Czechs.

The selected portraits of six intellectuals and politicians should be seen as a prism through which Slovak intellectual history appears in its various facets. The 'narodovci' (the pioneers of national awakening) tried to strengthen the Slovak nation in its attempts to secure the autonomy of its language and culture, and prevent assimilation by the Hungarians—which was a political issue. Some took part in the 1848 revolution, pursuing the goal of an autonomous Slovak district within the Habsburg Empire, while others opted for a modus vivendi with the ruling Hungarians. A third possibility was sovereignty, a common independent state with the Czechs. An introductory chapter deals with the political problem of assimilation and group rights in 19th-century Slovakia.

The analytical chapters focus on the intellectual discourse of the time, specifically on the influence of Western political ideas such as liberalism, constitutionalism, cultural rights, and nationalism. A further focus is on Slavic political ideas, such as the Slavic Renaissance, Slavic mutuality, and Panslavism. The volume is addressed to students of history, politics, and political theory and offers a unique insight into the political past of a young EU state whose recent language laws have drawn repeated international criticism. The author hopes that her analysis will help improve understanding of current Slovak politics.